Since father’s day I have been working to think of a way to post something about my dad. Nothing has really worked until just recently.

I was coming home from Vermont with Tay last weekend and Meg called me to tell me that the washing machine made a loud horrible noise and the rubber gasket on the front was all messed up. That was the full description. Naturally I concluded that she killed the washer, and that because of her negligence I was “inheriting” a broken machine and we needed to buy a new one or spend a lot of money to fix it.

I know what you are thinking, before I even know anything about what happened I say that Megan killed the washer and I am blaming it all on her? Seriously? Well sure as it was George Bush that ruined the economy and not Congress and/or FNMA encouraging home ownership as the prime goal of personal finance, and financial institutions creating instruments with no transparency or an accurate pricing model, and most importantly stupid people buying houses they couldn’t afford then she MUST be the one that killed the washer. Because it couldn’t be the dumb engineer who created a bad design nor the inept Chinese assembly plant that put it together wrong, or any of the 10 years of wear and tear before today that did it in. Sorry, I digress, that too is a dad trait.

Growing up, dad would fix everything; cars, anything electrical, tvs, appliances, it didn’t matter. Dad has this philosophy that 90% of fixing stuff is just taking it apart, cleaning it up and putting it back together (correctly). That earned him the nickname “fix-em dad”. But it was the other 10% that earned my admiration. Back to the washing machine…

So at 8PM while the girls watched Olympic Soccer I took the washer apart to figure out what was wrong, because that’s what you do in these situations. Watching dad, I learned to line up the screws as you take them out or rethread them as you go. Be methodical, or as dad would say, “don’t do it half-ass”. I line up the parts too, First out is the closest and last one in.

So it turns out that while I thought I was buying a full stainless steel tub, that only metal is just the screen piece that spins inside of a plastic tub (that you can’t see in the showroom). The plastic tub catches the water during the wash/spin cycle to pump out from the bottom. The motor, pully, and pump are all attached to this plastic tub held up with struts (little shock absorbers) on the bottom and suspended from the metal box by two heavy duty metal springs. This way when a lopsided heavy load spins, the force is absorbed by the springs and dampened by the struts.  All of the pieces float inside of the white metal box you see in your laundry room.

Pretty good idea except that the METAL springs that shake a whole bunch are hooked onto a PLASTIC hole. And while one spring has a nylon protector to alleviate friction, the other must have been lost during assembly.  Hence the wearing out of the hole and the break.

This is how the other spring looked 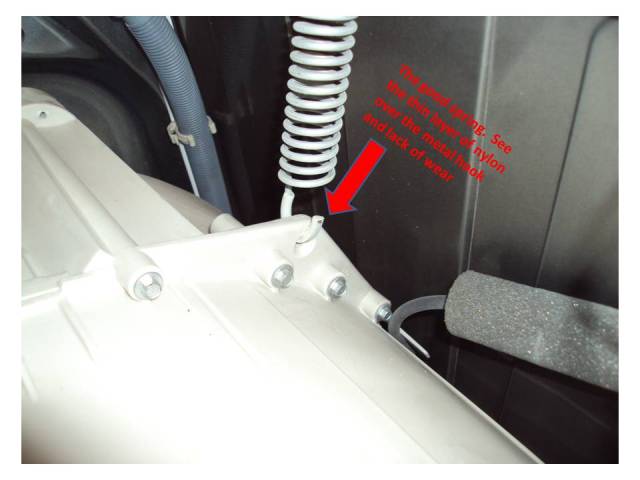 Megan of course wants to call a repair guy or just buy a new washer. Now the only way to replace this part is to pull the whole tub out, disassemble the screen, replace the tub and put it all back in. That’s got to be 4-5 hours plus the cost of the part = lots of money. A new washer would be $800.  I am not ready to quit.  So I decide that I can use two of the screws that hold the two halves of the tub together and splice several layers of galvanized strapping in between to create a new hole for the spring hook.  Note: galvanized strapping is like duct tape, except for people that want a longer term solution.  I use it for everything.

After about 4 hours, as I am finishing, Megan wakes up and says “You’re still working on this?”  Well after all that effort the washer is working now and hopefully I can get a few months out of this solution.

This story sums up my dad and how he has affected me.  I don’t give up on creating solutions and I hate wasting something that still has value.  When everyone else thinks something is done, I am still going at it, messing with new ways to make it work.  I can’t tell you how much I have saved over the years by not throwing things out and making the most of a bad situation.  I have lots of nicks and scars to show for it, plus a lot of cost savings, but most importantly to me, a stubborn perseverance to find a better way to do things that makes me who I am.

It really was a nice fix-em, thanks dad.