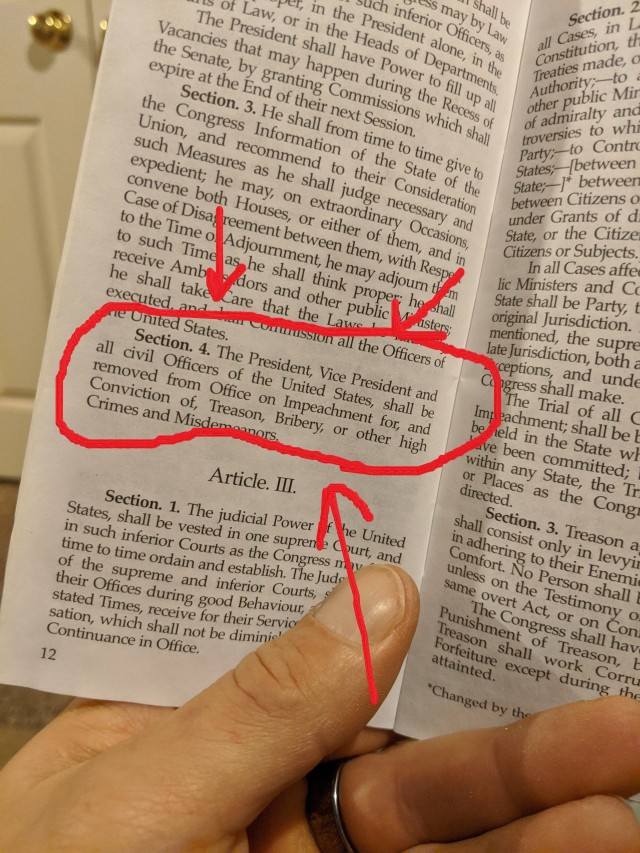 Given the news of the day, I would be remiss if I didn’t pen some thoughts about impeachment.  Let me state, I don’t think the president should be removed from office for his horrible, imperfect, wrong, and illegal conversations with the president of Ukraine. This may be the first time since John McCain’s death, but I actually agree with Lindsey Graham here, the White House and the president are too incompetent and stupid to know how to do something like this intentionally.  You saw the interview with Stephanopoulos, Trump thinks this is his way of getting “oppo research”, he doesn’t even realize that what he is doing is factually illegal (soliciting a thing of value for political gain from a foreign government). Because he is an idiot, I don’t think that is grounds for removal.

What I would like to see, is some form of impeachment, conviction (because clearly he is guilty, he bragged about it) and probation.  Because when you are too stupid to be trusted to not do something again, the court places you on probation.  In this case, the Senate could impose a verdict of placing someone in the White House, or a recording system, that would document all of his actions, reporting back to the court (Senate) ensuring that he doesn’t do this again. We keep wanting an adult in the room, and then the president fired them all, so now we need to appoint one.  Problem solved.

But I don’t get to make that determination. None of us do. I have written about this before, and I will note it again, we haven’t lived through a system of tyranny. We don’t know what it is like to live in a world where a leader could change the rules or use his/her power to STAY in power (ala Putin). Remember that the founders specifically wanted to prevent against kings or despots that used the military or police or other powers as commander in chief to keep them in power. That is why they created ‘checks and balances’. That is why we have civilian leadership of the military.

The Founders knew that preventing against executive tyranny was so important, that they worded the Constitution to be unequivocal: The President has to be perfect at all times when it comes to his/her abuse of power.  “…shall be removed from office…”  They left no wiggle room.  If the President commits even a Misdemeanor, which are specifically known as ‘lesser offenses’ often punished only with a fine, they shall be removed from office. “Shall be” is a mandate. I don’t get to question if this is a “political process”, no, it is a Constitutional one. And if we are to preserve the rule of law, the very thing that sets us above other nations that are ripe with “corruption” (you remember, the thing that was so important to root out in Ukraine), then we MUST remove the President –  regardless of the political cycle –  when he/she strays from the rule of law, even a little. The arc of history is more important than people cheering at rallies and pointing in other directions, “But Hillary!”, “But Obama!”, “But Hunter Biden!”, “Squirrel!”  I wish it weren’t so, but I don’t get to make that call. The Founders knew better.

However, I cannot get over this passage from pages 327-328 of the Mueller report which somehow Congressional Republicans refuse to acknowledge…

The President of the United States ordered a federal employee to manufacture a false federal document to make him look better, something that would go in the national archives. That is fabrication of evidence. A Class C Felony. And just because someone lower on the chain of command had to break the law (violating an order from the president) by not following through on that order, does not excuse the fact that the president violated the law by ordering a violation of it. Having adults in the room to prevent a 13 year old from doing the wrong thing, does not excuse the behavior of the 13 year old, aka our president.

For THAT, I think that Congressional Republicans have a Constitutional duty to ensure that the violator of law, when convicted, Shall Be removed from office. 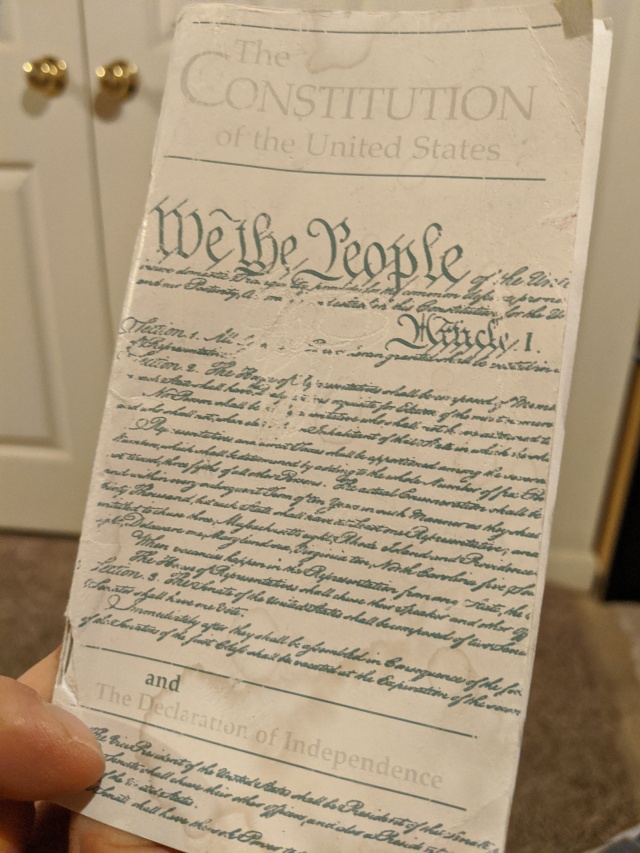