A few months back I wrote a post about gender inequality, the effects of objectifying women and their success in the workplace as a result.  I wrote about my perceptions of success and the criteria needed to get ahead.  I stand by those remarks but today my good friend Anita pointed out that there are still areas in which gender bias exists and that I was naïve to not see them.  While it is good for me to gain new perspectives from people I respect, I will take a different approach on the prescription to correct this ill.  As I walk through the approach, I think this will fit nicely in the Rational Republican series.

I was basing my perception of women succeeding in the workplace on non-technical disciplines, which is ironic because I work in technology.  I am trying to start a Women in Tech mentoring program in partnership with a local school near our campus in NH.  My email blast was fairly well received as 7 of the 27 female technologists I contacted were interested in participating.  Anita and I discussed that no VP level associates were in that mix.  The conversation moved to why this is the case and Anita pointed out two things that were really interesting.  First that while the top levels of an organization may be progressive in this area, that very often does not trickle down to the levels that would be in a position to promote women past the senior and director levels.  Second, those that do move ahead are women that put in the kind of 70-80 hour weeks similar to that of men who are successful.  Many women choose not to engage in that work:life dynamic, and so they inevitably are left behind.  This seems to be more prevalent in Tech, though I know female computer geeks that put in 80+ hour weeks, and I hope will someday aspire to the VP level. (Sara)

This second point really got to me.  As I think about the successful women I admire, they truly are logging extensive hours.  Several VPs in the finance area do, I know the leadership does, and Megan (also a VP) certainly does, especially during audit season.

OK, now it is time for me to branch out.

While this problem manifests itself in the workplace, the problem is not with corporate America.  If you do more work, you should succeed.  That is what we want, reward for effort and results.  Trying to legislate against an imbalance of power and equity that is a result of that axiom is very bad for a nation built on the notion that if you work hard you will win.  As Anita and I talked, I realized that the problem is not the macro-economic evil corporation, but the grass-roots American male and father.  Anita noted that the examples of men that are moving ahead quickly, most often have wives that take care of the details in such a way that those men can focus on work and not their family responsibilities.  The problem is men, but not men in the workplace, but men in the home.

I know for a fact that my career has suffered because I am not able to put in the kind of hours that I need to move ahead.  When Megan needs to crank hours she works weekends when I am able to cover.  In my role, and most others, to succeed you most often need to be on-site, not only getting stuff done, but selling the fact that you get it done.  That takes hours.  When a spouse has a partner that covers all non-work activity so that he/she is able to focus on work, that inevitably will lead to success.  This works both ways.  I have chosen not to be an absentee father during the week for several reasons.  Primary is the fact that as much as the girls make me crazy, I still want to be an integral part of their lives.  It is painful to me when I sense that they are NOT getting my fatherly perspective on things.  My favorite text exchange with Taylor exemplifies that point. 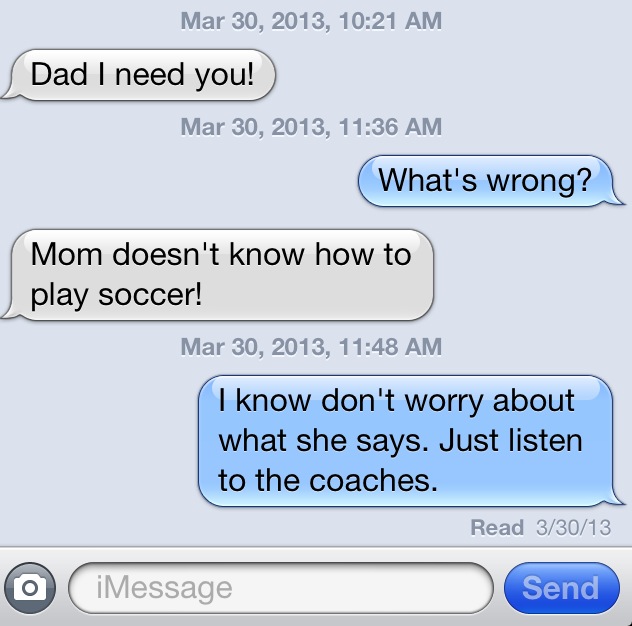 Tay relies on me for certain perspective that Megan can’t give.  That is a good thing and I am happiest when I see that she really wants me to be part of her world.  Haley needs the structure and the consistency that is much better delivered from me than Meg.  There are areas in which I excel and areas in which Megan is FAR superior.  Fathers should want to be more involved with their kids’ lives.  But the real benefit to society is when both partners find a way to support each other and agree to mutual career success.

But I will not let the women off the hook so easily.  The “mutual” part means that you agree on a parenting strategy and then execute against it.  If you come to agreement, you have to trust the other to execute even when you are not there with the same sense of intensity from both parents.  Oh and by the way, the ‘agreement’ part is on the SAME strategy.  How often do the ‘experts’ say that consistency is the most important part of being a successful parent?  Parental trust has to be more than token expressions and then overt complaints when you disagree with an approach.  That violates the very nature of a partnership.  I would argue that fathers (in two parent households) that decide to spend time at work, very often do so because they are not allowed to participate at home.  Women have to acknowledge that there is a certain ego in the notion of “motherhood” that automatically assumes a superiority of skill in all things parenting.  This is not the case.  Juxtapose this notion against the prevailing attitude in the workplace that ‘men are tougher and thus better managers’.  If that assumption is outrageous, then mothers as ‘better parents’ is just as obnoxious.

Clearly there is fault all around, but I argue that inequality in the workplace is an unintended consequence of inequality in the home.   Or vice versa, I really don’t care which came first.  I know you want to yell at me right now, but before you do, just think about it for a second.  Is there even a possibility that this might be true?  And if you are female and just dismissed my comments outright, thus subscribing to the notion of absolute superiority of mothers, didn’t you just make my point?  If you are male and repulsed by the notion that for your wife to achieve equal success that you might have to do your share of work around the house (including dishes, dinner, laundry, cleaning, diapers, soccer duty, etc) then don’t complain about feminists who are frustrated by earning 80% of your salary.  Come on, think about that for a second.  Still naïve?