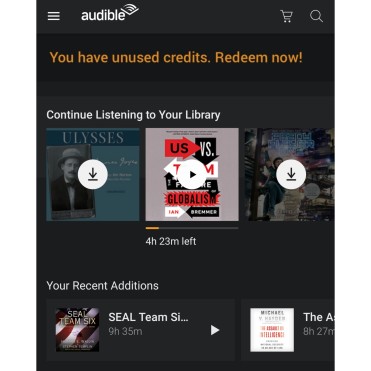 I was going to publish longer reviews on each of these books, but instead decided that I would just recommend some reading for those of you looking for good books this summer.

I have been trying to read actual text at least 15 minutes a day and also I subscribed to Audible, which I cannot recommend enough…its awesome for getting reading done.  I crank up the speed to 1.3x and can get through books pretty fast.  Here’s what I have read lately…

Seal Team Six – Memoirs of an Elite Navy Seal Sniper- Howard Wasden.   Awesome book that details BUD/S & Green Team training and a lot of coverage about how snipers execute long range shots.  One detail in the book was eye-opening for me.  Wasden was critical of Schwarzkopf during Desert Storm and it’s something that bothered me too.  SEALs had been training to secure the oil fields in case Saddam tried to sabotage the Kuwaiti oil supply.  Sure enough those of you that remember and were annoyed with it like me, those fires burned for 8 months churning 1 billion gallons of oil PER DAY.  But Schwarzkopf never used any US SOCOM forces at all, instead he only employed British SAS.  I think I read his book, but don’t remember any retrospective on this subject, it seems a classic, us-vs-them dilemma of using troops from another service and a possible ego driven mistake.  I need to do more research.

Lean In – Sheryl Sandberg.  I admit that it took me way too long to get around to reading this book, but this is a great book.  There are so many relevant stories about mentoring, both how to find and how to do it.  I also liked the continued emphasis on ‘sitting at the table’.  So many times in my career I sat off the main table when I arrived earlier than other major players.  F-them.  I should have sat at the table too.  If you are male, hopefully you do some self introspection, I did.

A Higher Loyalty – James Comey.  This is really a great book on leadership and leadership styles.  Comey talks a lot about his career, who influenced him, how it affected the way he went about leading teams, how that played out in policy creation that we only saw from an outsider’s perspective and only then did he spend 2 chapters talking about the juxtaposition between great leaders and Trump.  There is actually very little about the Trump administration which irritates me that the press made such a big deal about it.  However, the stories he tells of Trump’s inappropriate actions and how Comey views them against other great leaders, are poignant.

The Assault on Intelligence. American National Security in an Age of Lies – Michael Hayden.  Best book I have read in a long time.  If you want to see a truly fact based analytical dissection of the Trump incompetency…read this book.  Hayden is a 4 star Air Force general, former Director of NSA, former Director of CIA.  His contacts and intellect are beyond reproach.  He details all of Trump’s statements, tweets, and policies in the context of international events and relations with our enemies.  It’s a brilliant critique.  I especially like the recognition of the ‘Trump cycle’ that got us into this fake-news, lie-driven fiasco of a presidency: 1) Presidential Taunt 2) Russian Bots 3) Alt-Right Press 4) …

And a fire stoked hot enough to stir argument in my personal extended family, and I am sure many others. Little wonder the Russians continue to play. No real costs. Ready-made issues. A divided society to target. Americans seemingly working in parallel. A frozen U.S. government response.

Next time you frame a political argument based on something you saw on InfoWars, Breitbart, FoxNews or some Facebook meme…think about that.

Ready Player One – Ernest Cline.  Yes there is a movie, which I haven’t seen yet.  But if you are a fan of the 80’s, sci-fi and VR…you will love this book.  I read it a while ago, but I continue to recommend to everyone I meet.  The Audible version is read by Wil Wheaton, who is the President in the book, so meta!

Happy summer reading!  Please share any good books in the comments below.