I never really thought about what “A Crucible Event” was before I signed up for one.  I have been following the SEALFit training regimen for about 2 years now.  I have read the descriptions about the single and multi-day camps but I didn’t really get what it meant.  Coach Divine describes it as something that fundamentally transforms your life.

Signing up for 20X is a commitment in itself.  Besides the cost, knowing that you are asking to be put through serious stressful conditions for 13 hours, is significant.  For me, that meant that my life changed to adapt to what I knew was coming, over the past few months I amped up my training.

But the biggest change came during the day of the event and reflecting on it driving home.  I left the house at 4:40 for a 1:20 drive to Kingston, MA and Crossfit Kells.  I parked, did some ROM drills to loosen up, got changed into BDUs, boots and my t-shirt and headed in.  I stretched out maybe 5 minutes before the coaches started up.  This is 6:30 am.  The pre-event emails were in my spam folder so I didn’t really see them until late and I didn’t really get all the nuances, which was about to be made clear to me.

One guy in the front row had written his name on his t-shirt instead of “STENCIL”ing it.  Oh shit.  Coach Jim let into him first thing.  Coach Kyle then came up to me and asked what I didn’t get about the word “stencil”.  I just screwed up coach.  Great.  Within 5 minutes I was the class idiot.  One other guy wore a brown t-shirt instead of white and he got more shit than us.  A few people didn’t wear belts.  A few others were late.  “All buttons buttoned, all snaps snapped, all belt loops hooked and all shirts tucked in.”  We would hear it all day.  We even got good at inspecting each other.

A few warning messages not to be weak and then we were off.  The first evolution was a 45 minute plank.  Not some BS on your elbows crap.  But in a “leaning rest” position, which meant the upper part of a push-up.  I’ve done a few minutes before, but nothing like this.  What was I going to do?  I’m going to collapse.

A bunch of guys dropped their knees.  I never touched mine once.  Oh I moved my arms and did a stretch in a downward dog position and an arch, and I cheered on everyone as much as I could.  But somehow I found the strength to suck it up.  Porter couldn’t get the music to work from Coach Jim’s phone and so for each 30 seconds that it wouldn’t work, we added a minute.  We got to 53 from the music ordeal and then a few more minutes of punishment near the end because of some other screw ups.  At 60 minutes, we could get back to our feet.

We then took off for some running around the neighborhood.  We warmed up a bit and then Coach Chris (ex SEAL) told us to stay within 6 feet of him and he took off at a fast pace.  On the whole of the day, I was always around 12-17th in order of finishing stuff of the 35 that showed up (42 signed up and paid).  When some got too far behind and we didn’t go back to help them finish up, we did burpees.  “100% effort.  100% of the time.”  A few guys would put their hands on their hips and then we would do burpees with our hands in our pockets.  Hitting the deck on your chest was rough.  But getting up was harder.  It became a theme all day.  The Coaches would add burpees that we owed them for each infraction and then take a few off if we did something well.  By the end of the day, we owed 580.

Next we packed some gear in our rucks and boarded a bus.  On the drive we were told that we needed to memorize the poem Invictus and it would be quizzed.  Now I suck at memorizing and we all chanted it on the bus a dozen times.  I stared at the words over and over.  If someone gave me the first words, I could finish the sentence, but I just couldn’t remember the damn thing.  And then I actually read it and listened to the words.  I could tell you what every line meant from memory, but I could not memorize it.

We got off at a public beach and headed down with rucks and a “weapon” which is a 4′ by 2″PVC pipe filled with sand.  We stowed our gear, drilled on being neat and organized and headed to the surf.  Arms linked, fully dressed we took 1 step at a time into the 54 degree water.  We got all the way to our chest/necks and stayed there for a while keeping the weapon out of the water and then headed back to our rucks.  “Don’t shiver!”  We then proceeded to become “sugar cookies” and then ran back to the surf.  Sand and then wash it off, over and over, that was fun.  Make sure your swim buddy is covered head to toe and face.  We loaded trash bags with 20 lbs of sand, added it to our rucks and then held it over our heads until it was obvious we had at least 20 lbs.  When I got home at night, all my wet gear I carried in the bag and the sand weighed 38 lbs.

We then started a series of “good pace” jogs on the beach and would jump in the water every once in a while for good measure.  Then we would run in the surf.  Downward dog, head on the ground with surf submerging your head.  Situps in the surf.  Pushups.  Don’t Shiver!  All with the packs on, we even did this crazy thing with rolling over backwards, pack on, touch your feet to the ground over your head while in 1′ of water.  We were frozen but were having fun.  We’d laugh and joke together.  Don’t let go!  Don’t break the chain!  On your feet!  Drop!  Feet!  We helped each other each time.

Next we ran games where each boat crew would compete against the others.  “Pays to be a winner”.  Proud that our boat crew won 2 of the 4 challenges and so we got to warm ourselves while the others hit the surf.  We ran some sprinting races and I always seemed to be 2-3 out of the top 10 for skipping more surf torture or “water appreciation” as Coach Chris called it.  At one point I got dizzy, and almost passed out.  I didn’t break, but I worried that my body did.  The best part was our inability to count.  We were in 4′ of water, arms linked and all we had to do was to sound off by whatever count the coaches said and we could get out of the water.   3-6-9-12… never ONCE did we make it.  We could do ones, twos, and fives; that was it.  Man we killed a lot of time in the water with that one.

The bus took us to the Marshfield Fairgrounds where a horse show was taking place.  The irony was not lost on me as Haley was in Deerfield.  We got some calories and water and tried to get the sand out, while on the bus.  We did a ton of log work.  Holding that thing over your head was exhausting, but just when I thought I couldn’t do it anymore, somehow my body kept my arms up.  My boat crew won the team race and we also won this crazy tire challenge that the coaches were particularly proud of their creativity.  We ran 100 meters and grabbed a bunch of old dirty car tires that were in a pile for probably years.  The water in them was brown and smelled nasty as it splashed while we ran back to the start line.  We stacked them over one of our team-mates Michelin-man style, flipped him on his side so the tires were upright and then rolled the tires with him inside 200 meters down the field, tagged the coach, rolled 200 meters back, stripped off the tires and sat down.  All the while making NASCAR motor sounds as loud as we could.  We were in second place out of the gate but managed to catch up and win that one too.

On the bus ride back to the gym we had some sandwiches and more fluids.  I partnered with a guy who worked at the gym and we did a team Murph with our packs on, switching responsibility for every other set.  I did 5 pullups, he did 10 pushups, I did 15 air squats, he did 5 pullups, etc.  20 rounds.  Before we started the coaches challenged us that if we could sound off by 3’s we only had to do a .5 mile run at the end instead of 1, but if we screwed up, 2 miles.  …63-66-69-71 oh 72 AAARRRGGGHHH.  I sucked on the pullups, but I kicked ass rucking out the miles with my pack.  We finished 6 and 7 at about 43 mins.

The day was getting late.  I have seen a false summit before.  Eric and I had one on our hike of Mt Toll and while that was hard on me, I never really experienced it like this.  Coach Kyle led us on a 25 minute yoga session to calm our bodies and relax our minds.  The coaches started talking about handing us our completion pins and then, “Hands on hips?!?  Are you fucking kidding me?!?!”  Bear-crawl your asses outside and line up.  Burpees.  30- ok that’s a lot.  50- we gotta be done right?  75- holy shit.  100- I might die. 110 we finally stopped.  The whole time the coaches were spraying us with hoses and dumping ice water on us.  Next came at least 60 by 4 count flutter kicks.  It still hurts my abs to sneeze.

Finally we did this pushup in a line where you put the feet of the guy ahead of you on your shoulders so that the only thing touching the ground is your hands.  After a few tries we got it right and earned the right to file back into the gym.

Thank god a few guys had the poem memorized.  One led the whole group in reciting Invictus in perfect unison.  Somewhere there is video of it, I got chills.  We screamed it a few times.  And so I was transformed.

Out of the night, I did not cry aloud, my head was bloody, but I do not fear the years and I reject the horror of the shade, I will figure out how to write my scroll because…

I am the master of my fate,

I am the captain of my soul. 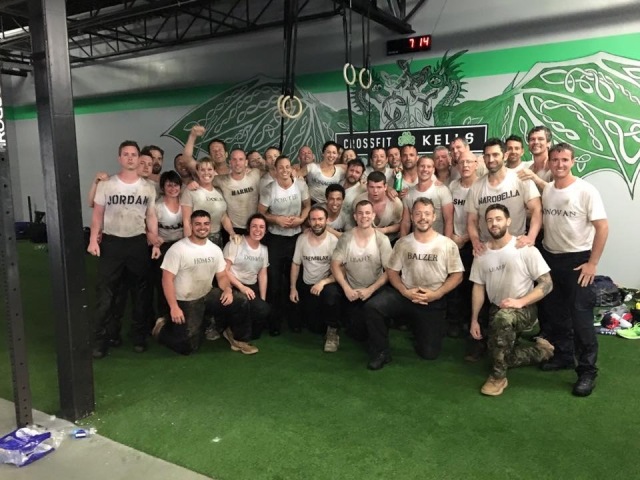 1 Response to A Crucible Event