Saturday night, Sara and I took the girls to the Kenny Chesney country-fest at Gillette.  We took the bus with some friends and of course had a great time tailgating. 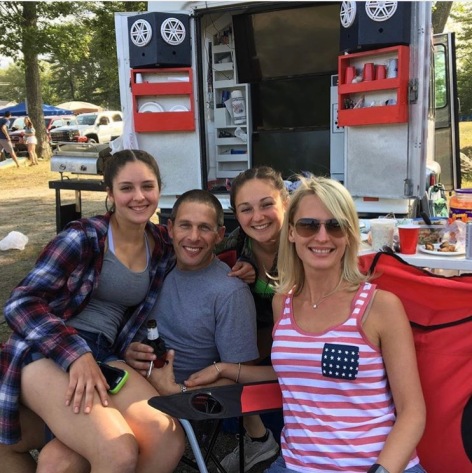 I have to say that overall the show was ok, not great but not awful.  Thomas Rhett was one of the opening acts.  He was actually really good.  We didn’t get to see Old Dominion.  Honestly, I thought Rhett was better than Chesney.  Kenny Chesney is kind of like the George Thorogood of country music.  You can see the influence of Jimmy Buffett too.  He sings a lot of feel good drinking songs that generally have an awesome sense of nostalgia.  I’m not saying there is anything wrong with that, it’s just really superficial.  When you see his stage show, that superficiality comes through.  At one point he asked us to celebrate with him that it is 2017 and this is his 17th show at Gillette.  The crowd roared.  Come on, really?  What does that even mean? He does a lot of running around and skipping in his ‘dancing’ and he seems to be only able to hold the mic in his right hand and slap his thigh or make a lot of hip-hop hand gestures, and that’s the extent of the show.  The band is pretty talented though, that is for sure.  He rarely plays guitar, but the other guys are solid.

I say all this because it made me think back on an unfinished blog post about the BEST show I have ever seen.  Now granted, small venues are much easier to rock than 60k in a stadium.  But overall I have more respect for the music, the lack of lecturing BS and the creativity in a production.

Back in April, Sara and I saw Squirrel Nut Zippers and Ozomatli at the Capitol Center in Concord.  I am a huge fan of Ozomatli, these guys bring a great blend of what I might guess is the soul of LA and I dig it.  SNZ I have been following for at least 20 years back to when they released Hell in 1996.  I am just in awe of how they fuse styles and produce modern hat-tips to the classics, most especially, Cab Calloway.  I have crappy iPhone footage, but watching the Ghost of Stephen Foster play live, while the video runs on the in-house screens, was just awesome.  If you ever want to know how music can ‘feel’ in a way to balance an image, watch this video.

But what I really loved was how they ended the show, and it was an experience I will never forget.  SNZ and Ozomatli collaborated on a song called “Alley Cat“. Which they played together on stage.  Full disclosure, I like multi-threaded melodies and when you put that many instruments and talented musicians on stage, you get to experience so much complexity that it is over-stimulating in a way that let’s one lose themselves in listening to the music.  That happens for me.

At the end of the song, they pivoted to some drum laced rhythm and all the guys picked up portable instruments and started marching through the audience.  As it was happening, we just figured they would march back on stage like all bands do.  Nope.  They disappeared out the back.  We could still hear them playing but in a distance.  So we headed out.  I would describe the following ‘experience’ as nothing short of spectacular.  These guys all started jamming in the lobby of the Capital Center to a heavily modified montage of Tequila and other classics, literally surrounded by the audience.  It was so much fun.  Blew my mind how they pulled it off.

Maybe it’s impossible for a big time act to have this kind of intimacy with the audience.  But I have no interest to be lectured by some self-absorbed pop star and their thought du jour (read: Tim McGraw, Taylor Swift, Bono, etc).  I prefer authentic experiences that make me rethink how things can be done, and that includes the simple things, like going to a music show.  So I will continue to buy the music of the big pop acts, but I highly doubt I will do much more to shell out big cash for these shows that always seem to underwhelm.  The smaller acts work so much harder and are genuine.  I like that more.  Those are the shows that amaze me.