NH Is a Sanctuary State 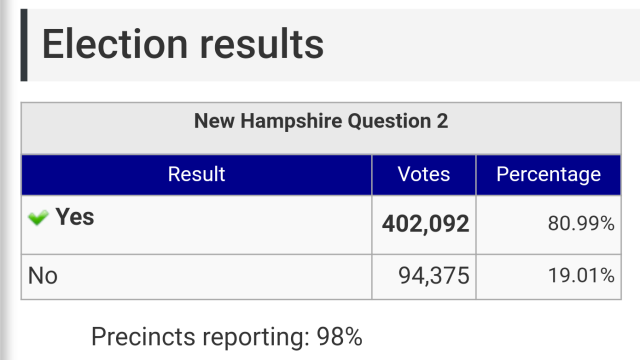 You read that right. NH just became one of the best places to come and live if you don’t want to be harassed by the State governmental authorities. Voters overwhelmingly passed ballot initiative #2, co-authored by state Reps. Neal Kurk, R-Weare, and Robert “Renny” Cushing, D-Hampton. It states,

An individual’s right to live free from governmental intrusion in private or personal information is natural, essential, and inherent.

Sounds awesome right? I voted no. I will point out 2 things.

First, the authors intentionally and purposefully worded it vaguely so that it would be open to broad interpretation in the courts for the next “25 or 50 years.”. When asked how it should be interpreted Rep. Kurk offered this gem, “Obviously it’s not defined in the amendment, just like the freedom of the press isn’t defined (in the First Amendment to the U.S. Constitution),” “It’s up to the courts.”

So if you ever wonder how so much power gets ceded to the courts, there is your answer. It’s intentional. Contrary to our new moronic acting Attorney General, the courts are not intentionally supposed to be the weakest of the three branches. Rather, they are supposed to respond to the other branches. If the executive doesn’t overstep, courts won’t need to curb an unjust action. If legislatures write clear and coherent laws, there is no need to adjudicate them. There is a reason the metaphor of the ‘scales of justice’ is so powerful.

Second point. If these two knuckleheads had written “US Citizens” instead of “Individuals,” I would be all for this. But instead, more than 80% of Granite Staters just voted to extend state constitutional protection to illegal aliens and terrorists against non-warrant based metadata gathering, surveillance and data collection. So if you are a foreign terrorist, here’s a tip; come set up your intelligence operation in the Granite State. We now guarantee you will find sanctuary here.